Calculations of electron inelastic mean free paths. XII. Data for 42 inorganic compounds over the 50 eV to 200 keV range with the full Penn algorithm

MDR Open Deposited
Analytics
Add to collection
You do not have access to any existing collections. You may create a new collection. 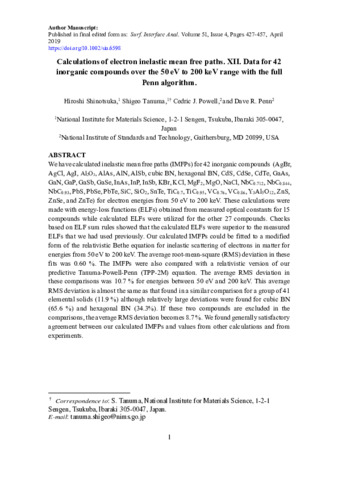 We have calculated inelastic mean free paths (IMFPs) for 42 inorganic compounds (AgBr, AgCl, AgI, Al2O3, AlAs, AlN, AlSb, cubic BN, hexagonal BN, CdS, CdSe, CdTe, GaAs, GaN, GaP, GaSb, GaSe, InAs, InP, InSb, KBr, KCl, MgF2, MgO, NaCl, NbC0.712, NbC0.844, NbC0.93, PbS, PbSe, PbTe, SiC, SiO2, SnTe, TiC0.7, TiC0.95, VC0.76, VC0.86, Y3Al5O12, ZnS, ZnSe, and ZnTe) for electron energies from 50 eV to 200 keV. These calculations were made with energy-loss functions (ELFs) obtained from measured optical constants for 15 compounds while calculated ELFs were utilized for the other 27 compounds. Checks based on ELF sum rules showed that the calculated ELFs were superior to the measured ELFs that we had used previously. Our calculated IMFPs could be fitted to a modified form of the relativistic Bethe equation for inelastic scattering of electrons in matter for energies from 50 eV to 200 keV. The average root-mean-square (RMS) deviation in these fits was 0.60 %. The IMFPs were also compared with a relativistic version of our predictive Tanuma-Powell-Penn (TPP-2M) equation. The average RMS deviation in these comparisons was 10.7 % for energies between 50 eV and 200 keV. This average RMS deviation is almost the same as that found in a similar comparison for a group of 41 elemental solids (11.9 %) although relatively large deviations were found for cubic BN (65.6 %) and hexagonal BN (34.3%). If these two compounds are excluded in the comparisons, the average RMS deviation becomes 8.7 %. We found generally satisfactory agreement between our calculated IMFPs and values from other calculations and from experiments.